Tree of the Week: Lightening Strikes!

Osage orange, Maclura pomifera, is a tree possessed of many strange qualities. The standout is its fruit, those softball-sized “oranges”, “hedge apples” or “monkey brains” that fall to the ground with a startling thump in the early fall. This fruit, along with those of the locusts and Kentucky coffeetree, belong to a class of evolutionary anachronisms – the large land mammals they co-evolved with, and that formerly distributed their seed, have gone extinct (that these are all extremely tough and adaptable plants is an odd coincidence). While these other species are distributed fairly widely, Osage orange’s native range has always been quite small, restricted to the Red River valley that forms the Texas/Oklahoma border and extends into Arkansas. This is rough country – hot, dry, windy, the river itself salty – and the harshness of the terrain has branded itself onto this tree. It is exceedingly tough; thorny, drought-tolerant, its wood, leaves and fruit impregnated with insecticidal and antifungal compounds. On the Janka hardness scale it ranks 2620 – compare this to white oak (1360) or hickory (1820). Osage orange wood, especially when dead, will dull a chainsaw in short order. It was the preferred bow-wood for American Indians, hence the French-derived common name “bois d’arc” or “bodark” – literally “tree of the bow.”

What’s so odd about this, is that the tree grows so fast. There’s usually a fairly direct and inversely proportional relationship between growth rate and hardness: fast growth = soft wood. Osage orange is the only temperate tree I know of that defies this entirely – 3 feet a year is easily achievable, with some sources suggesting 7 is possible (I can believe it). The new growth has milky white sap in its pith, another deterrent to predation. This tree’s tough disposition and rapid growth has led to it being planted all over the United States, particularly for use as windbreaks and hedges (hence “hedge apple”), always purely utilitarian uses. It is often looked down upon as an ugly workhorse, whose uncouth habits make it fit only for the back 40. It has little aesthetic value – no fall color, showy flowers or pleasing fragrance.

It might be the tree of the future though, particularly the thornless male cultivars like “White Shield” and “Wichita” that share all of its tough traits, without the liabilities. As much as I think people need to be more accepting of “messy fruit”, even I have to admit that hedge apples are a liability – they could easily dent a car or knock someone unconscious under the right circumstances. But this is simply one of the toughest, strongest, fastest growing and most drought-tolerant trees in North America, and without fruit it is almost too good to believe. So many sites that have been deemed too poor for anything but junk trees could be well-served by Maclura pomifera. Even the straight species deserves more use in parks. Specimens in Tower Grove park have survived 130+ years of abuse. The tree’s size is ideal for urban settings – typically 40-60 feet, not huge but large enough to cast plenty of shade. Branch failure and decay is rare, even with long-dead wood.

Anyone who thinks this tree is without aesthetic virtue has either never seen a mature specimen, or has no imagination, for the bark is absolutely captivating. Best in class. Orange striations with bulbous swellings and burls pushing through, like rocks jutting out of a raging river’s current, the grain forming eddies and whirlpools around them. Some of these burls look like Osage oranges themselves. I could imagine a totem-pole artist walking up to one of these, observing for a long while, and then simply folding up their toolbag and going home. 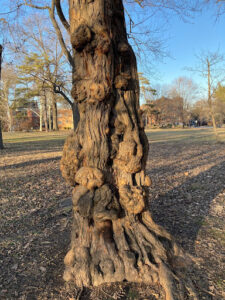 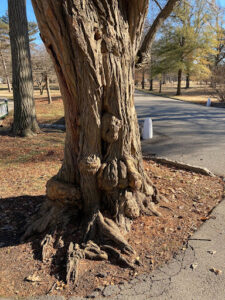 Some of nature’s finest art. The one on the right always looks to me like some forest troll got trapped inside of it – his head front and top-center, his right arm wrapped around the lower left side, his huge angry left fist below the head, cursing and vowing vengeance against the wood sprites who imprisoned him in there. Maybe I’ve stared at that tree a little too long…