White mulberry, Morus alba, has previously been featured in Tree of the Week. I didn’t have a lot of good things to say about it. 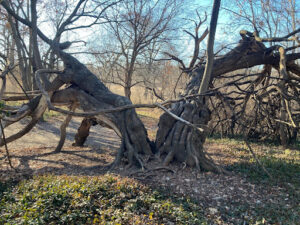 I go left, you go right!

It’s a highly problematic invasive species, but like all of the organisms of this earth (with the exception of the mosquito, the tick and the chigger) it does have a useful place, just not in Missouri.  White mulberry trees are native to China, where they’re perfectly fine plants – edible fruit, medicinal leaves and the only food source for the silkworm (and hence the source of all true silk). In North America they seem to cause nothing but trouble. The sheer multitude and variety of undesirable characteristics this tree possesses often cover up the one I wish to discuss, and which I find extremely interesting; its tendency to split down the middle. 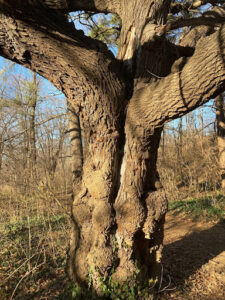 Splitting is often the result of a type of tissue called “included bark”. Outer bark is not living tissue, but rather an accumulation of dead cells. When two stems grow against one another at a very tight “v” shaped angle, the presence of this bark prevents them from forming attachments to one another. As they grow larger and begin to push against each other, this “dead zone” of bark opens further – the stems wedge themselves apart. Wind and precipitation exert leverage on the canopy above this fault line, and the tree splits. White mulberry is a serial offender. (Note that all of the pictures in this article are of different trees. And if you want I can supply dozens more!) 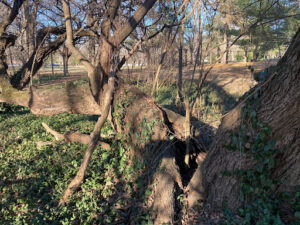 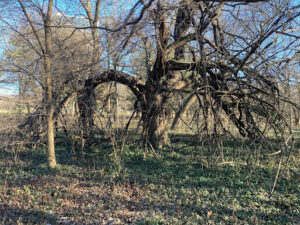 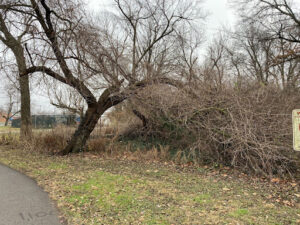 I really do apologize for the puns in this article. At least the trees are cracking up…

So why do some trees exhibit such “bad behavior”? In some cases, as in the (in)famous Bradford pear, it is a trait that was sort of accidentally bred into a cultivar. In others, particularly maples and lindens, it is likely a result of taking trees out of the forest environment in which they evolved. Unlimited sunlight leads to excessive growth that they cannot structurally sustain (much as unlimited access to food often does for us humans). I cannot say conclusively why white mulberry does it. I have never observed it in its native Chinese habitat, but I have observed many specimens growing in forest conditions. Those that do not split once reaching significant size are the exception, not the rule. This has led me to form my own hypothesis – that this trait, which appears to us to be an obvious bad habit, is in fact beneficial to the white mulberry. 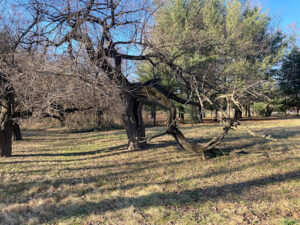 If you observe the specimens in these pictures, you’ll notice very little growing around them. In some cases groundcovers, herbaceous plants or small woody growth can be observed, but nothing that would offer much competition to the mulberry. It’s hard for anything to grow when it has a tree laying on top of it, particularly a relatively dense and heavy tree like mulberry. What’s more, the fractured halves of the mulberry seldom die. They just lay down on the ground and continue to grow with surprising vigor. Their lateral branches, now facing upwards, become mini-trees in their own right. So maybe, just maybe, this bad habit of the white mulberry is in fact just a tree muscling its way into more growing space. As the modern techno-cliche goes, “it’s not a bug, it’s a feature.” 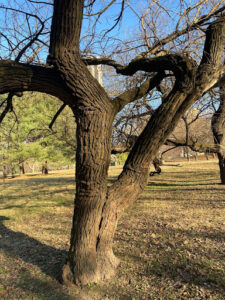 Most of these photographs were taken in the northeast corner of Forest Park, between West Pine Woodland and an area just north of the boardwalk by the Steinberg Rink. This is where I first noticed the mulberry splitting phenomenon, but I have since observed it in countless areas (the tree pictured next to a paved path is in Hanley Park in Brentwood, for example). I must admit that the first picture at the top of this write up, despite being an invasive species, is of one of my favorite trees in Forest Park. To learn more, visit a blog post I wrote several years ago while working for Forest Park Forever: 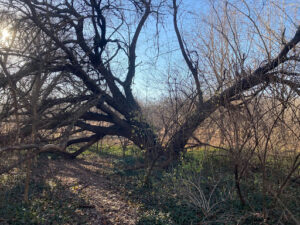 And now we must go our separate ways…