The Woody Monster of Cattail Canyon 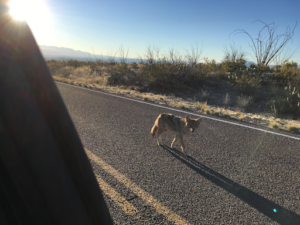 Mark Twain said the coyote is “a long, slim, sick and sorry-looking skeleton” and I would have agreed before seeing the fine furry inhabitants of Big Bend. Never before had I seen such healthy, well-fed, and noble looking coyotes.

Big Bend National Park, located on the Texas/Mexico border, closest to the towns of Terlingua (a ghost town, Viva Terlingua!) and Lajitas (once ruled over by a political dynasty of beer-swilling goats) is a magical place. Wonderfully remote and isolated, the night skies are black and full of stars, and you can watch the sun set several times in one day if you move through the canyons fast enough. Here I actually watched a coyote (pictured above) chase a roadrunner, luckily without getting crushed by a boulder during his attempt. The topography ranges from almost subalpine to subtropical, from the top of Emory Peak (7,825’) to the banks of the Rio Grande, and in a 40 minute drive you can leave your snowy lodging in the Chisos Basin and relax next to palm trees in the warm sun, in January. 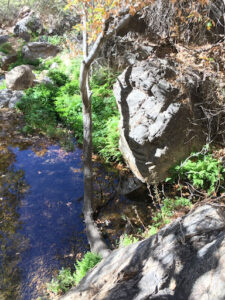 The Woody Monster – a gentle, misunderstood beast that feeds only on sunlight, water and mineral nutrients.

Tucked away, isolated in an isolated park, is the fragile ecosystem of Cattail Canyon. A half-acre microclimate, this is where much of the rainfall and snowmelt of the Chisos basin drains from 2500 feet above, feeding a creek that runs through the canyon and eventually dissipates out into the dry desert surrounding it. This stream creates an oasis nestled in the shadows of the mountains, lush and green, that wouldn’t look out of place in the Ozarks. Ferns and moss cling to the rocks, and poison oak stands in for our local poison ivy. The ultra-rare Chisos oak (Quercus graciliformis), native only to the “sky island” of the Chisos mountains and surrounding area, completes the effect and makes a Missourian feel at home (it could pass for an immature northern red oak). Only the healthy coyotes seem out of place. 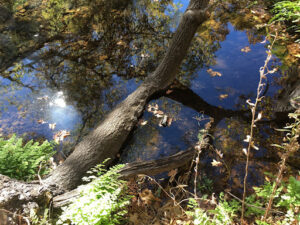 When I first noticed this particular specimen of Chisos oak I immediately thought of the Loch Ness Monster, its neck arching up and out of the water, its long back partly submerged. I have seen plenty of oddly-shaped trees, but this one is exceptional. It’s roots cling to a rock, some of them creeping along the bottom edge to soak up water, some reaching up onto its dry face for stability – a perfect blend of O2 and H2O. Of course trees rooted to rocks are nothing unusual, but a tree making its major contact with water along the course of its trunk…this remains the first and only such tree I have ever seen. Its leaves remained in late January, although their yellow color led me to believe they were no longer active (specimens higher in the Chisos basin had gorgeous crimson leaves, but I would guess the mild weather in the canyon prevented this color change.)

A closer inspection of its root attachment and the curious, deformed portion of its trunk resting on the creek bed would have required moving through poison oak, trampling through ferns and entering the creek – an unforgivable desecration. Some questions are best left unanswered. As to its unusual lean, it points in the same direction as nearly every tree in the vicinity; they are all slanted away from the back of the canyon and the waterfall. I would guess that either a torrential storm or an unusually large amount of snowmelt in the mountains led to a gullywasher that pushed these trees down and outward. 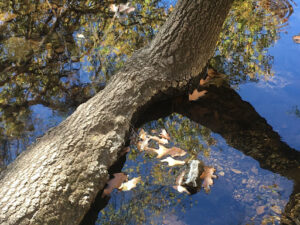 The creek bed/trunk interface looks much like any tree growing against rock – the ridge of lighter “scar” tissue along the edge is commonly seen on trees in rocky, wild areas.

The odd shapes and wondrous deformities of such trees tell fascinating stories. The scientific portion of my mind seeks to understand what forces have given them their unique character, how biology, geology and topography have made them what they are. But some deeper layer whispers in myths and childlike reveries, and the trees come alive like leafy serpents, moss-clad giants and gnarled knobby trolls. I find no conflict in this, no sense of intrusion, only complementary ways of seeing. It is imagination and curiosity that drives discovery, and discovery and analysis that in turn drives imagination to greater heights. Trees, these simple, ancient woody creatures, still have enough mystery to keep both portions of our minds busy for centuries to come. 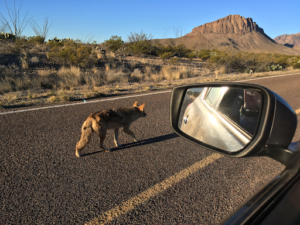 The roadrunner is farther down the road and just out of the shot, too fast for either of us to catch.