Tree of the Week: Sabamiki Catalpa

The Woody Monster of Cattail Canyon

Tree of the Week: Silver Maple vs. Sidewalk
By: Mark Halpin, Forestry Manager

Just outside of Forest ReLeaf’s Juniata office stands a silver maple (Acer saccharinum). Not the most desirable species, it is nonetheless one whose root system handles the awful conditions of most urban tree lawns quite well (if only the canopy were a little more durable!). Here it has not only claimed almost the entire tree lawn as its own, it has swallowed half of the curb as well. Given time, such trees’ woody basal roots will “spill” out onto the street itself (it’s getting close in the middle-left portion). 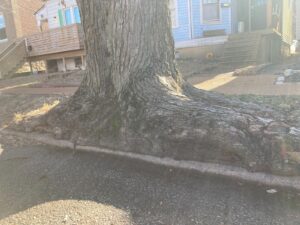 Note the woundwood at bottom right and left. Tree vs. curb? Tree wins.
Tree vs. concrete saw? A much more “interesting” wager…

This “spillage” (I have yet to hear a more technical term for it) may look funny, or beautiful depending on your perspective, but it isn’t really a problem. It won’t hurt anything – now you just have a wooden curb. For some reason, people prefer their curbs to be concrete or asphalt, and so such woody material is often removed. That may be the case here, or the curb may have been replaced before the wood fully encroached on it and the roots were cut in the process. Regardless, the damage is done. 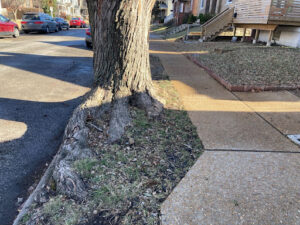 The sidewalk has also been replaced – it appears recently, judging by the fresh appearance of the concrete. The tree lawn has been expanded and the new sidewalk placed farther away from the trunk. While this is certainly the right idea, the execution was flawed. The basal roots have been badly damaged in the process. It’s easy to judge the public works crew that did this, but let’s look at their options: (1) make the sidewalk “fit” the original way by shaving the side of the tree down with a stump grinder (worst), (2) remove the tree entirely (not as bad as 1), or (3) what they did (usually the best choice available to them). The fact of the matter is that when large woody tree roots and a sidewalk are occupying the same space, rectifying the problem without damaging the tree is extremely difficult. Having worked through these issues with sidewalk crews, I have gained much sympathy for their dilemma. 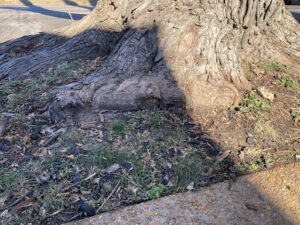 Note the further root damage, lower left. It’s upsetting. But so is asking someone making $18 an hour to remove a sidewalk slab with a jackhammer and shovel, instead of a diesel-powered excavator with a climate-controlled cab.

Those huge surface roots, like wooden anacondas snaking across the grass, are a good indicator of a lack of oxygen in the soil. Roots need water – everyone knows this from grade school science – but they need oxygen as well, and if they don’t find it down in the soil they’ll get it on the surface. This is the heart of the conflict between roots and pavement, as pavement of any kind typically needs to be set on very compacted (hence low-oxygen) ground. This leaves only a fine pocket of air and moisture trapped between the bottom of the pavement and the base material – and this is exactly where the roots grow. They have no choice! And as they get bigger, they lift and eventually crack the pavement.

So we need to send in oxygen, with a whistle and black-and-white-striped shirt, to break up the fight between tree and pavement and prevent this from happening in the first place. But how do you get oxygen underneath the pavement? There are currently two options: “suspended pavers”, essentially huge, load-bearing boxes of oxygen-rich growing media with pavers atop, or “structural soil”, gap-graded rock with the space in between them filled with soil, also able to support a heavy load. Suspended pavers are the Presidential Suite for tree roots, complete with caviar and warm face towels. Structural soil is more like a really nice tent, not as fancy but MUCH cheaper and easier to install. (Another, different solution that approaches the problem from the top is rubber sidewalks, as seen along the west side of the Missouri Botanical Gardens. They’re quite pleasant to walk on.) 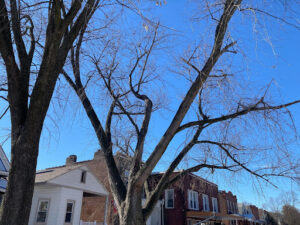 A little thin on top, which may be a good thing in this case.

Let’s get back to the tree itself though – what’s the prognosis? Statistical analysis conducted in Minneapolis found total failure rates (this means the tree is uprooted) increase by 224% for trees with similar damage. (Boulevard tree failures during wind loading events – Gary Johnson, Chad P Giblin, Ryan Murphy, Eric North, Aaron Rendahl, published in Arboriculture and Urban Forestry). That is very bad, but it depends on wind leverage to take the trees down. This tree is already about as mature as a silver maple will get in a tree lawn, and its crown thinned by storm damage and age (it is, after all, a silver maple), and so wind loading is reduced. I would make a non-legally binding wager that it will slowly fall apart, as is typical for the species, as opposed to total failure. It would have done this regardless of the sidewalk repair. That root damage will hasten this process somewhat, but it’s certainly not a death-blow.

To give a more succinct answer…I still park underneath this tree all the time. If they had gone with the stump grinder to the side of the tree, I probably wouldn’t.