Tree of the Week: Silver Maple

Tree of the Week: Eastern Cottonwood 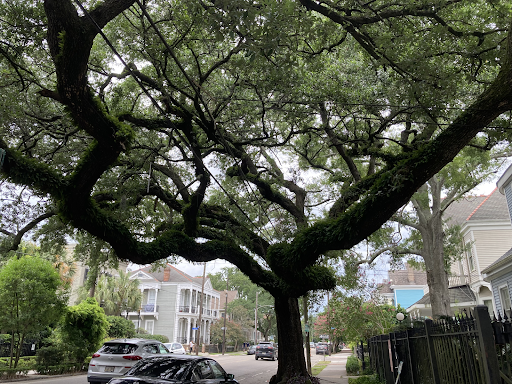 Simply impossible to do justice to these trees with photographs...taken in the Garden District in New Orleans, LA. Note how well the growth habit accommodates powerlines!

The Southern live oak (Quercus virginiana) is the iconic tree of the Deep South, where its enormous spreading limbs, often adorned with Spanish moss and resurrection fern, offer an abundance of much-welcomed shade. Beginning in southeast Virginia, its native range hugs the Atlantic and Gulf coasts, never venturing far inland with the exception of Florida and Texas, where it strangely strays from its moist, humid preferences to make a home in the arid Hill Country. With a maximum height of around 65 feet but a potential spread of up to 90, it is unusual in being typically wider than it is tall – perhaps an adaptation to the hurricane-plagued environment in which it grows. This habit of producing huge, curved branches has made it a favored tree for shipbuilders as such branches were the ideal shape for hulls. The USS Constitution, “Old Ironsides”, the world’s oldest still-functioning ship at 224 years old, was so named because of the extremely dense live oak planks that comprise its hull.

“Live oak” is a generic term for evergreen oaks, of which there are 31 across North America, Africa, Europe and Asia. (Quercus suber, the cork oak that lets us plug our wine bottles, is a live oak. The word “cork” is derived from “Quercus”.) Unlike coniferous evergreens which typically shed their needles in 2 or 3 year cycles, the live oaks hold a season’s leaves until immediately before new leaves emerge, meaning they are not “true” evergreens. This also means that the further north they are planted the more obvious this becomes as defoliation will occur earlier. Some oak species common to the St. Louis area, particularly the southern species such as willow oak (Q. phellos) and water oak (Q. nigra) display similar tendencies and can hold their leaves in a green state far into the winter when temperatures are mild.

Of course live oaks are planted far north of their native range: many a northern tree lover has returned from a trip to the Deep South dreaming of one in their yard. These trees are just too beautiful and unique to escape the curiosity of experimental growers, and the Morris Arboretum is in fact currently conducting an experiment to grow them in Philadelphia. There are reports of specimens – none of them with the impressive spreads of the 300-400 years of growth seen in the south – in northern climates. Consistent sub-freezing temperatures, especially combined with dry frozen soil typically causes defoliation and tip dieback. Sub-zero temperatures are more damaging, meaning a live oak in Missouri is likely to be little more than a small curiosity. The ‘Compton’ oak- a hybrid of Q. virginiana and Q. lyrata (Overcup oak) can be grown here, but bears little resemblance to a Southern live oak. Post oak (Q. stellata) is, at least to my eyes, the most similar thing we can grow in St. Louis and coincidentally my favorite member of the Quercus genus. Though the leaves bear no resemblance, the “wider than tall” habit is often seen in post oaks, as are the enormous and low-spreading branches. Spanish moss and resurrection fern will not grow here but post oak limbs are often covered in native mosses and ferns, further strengthening the resemblance.

So if you want to mimic the Southern landscapes, plant a post oak now! They’re slow growers, but with diligent care your great grandchildren will really appreciate what you’ve done. In the meantime, take a trip to visit these beautiful giants in their native land, enjoy the fine food and hospitality, and take solace in the fact that we get fall color instead.