Tree of the Week: Sourwood

Tree of the Week: Bald Cypress 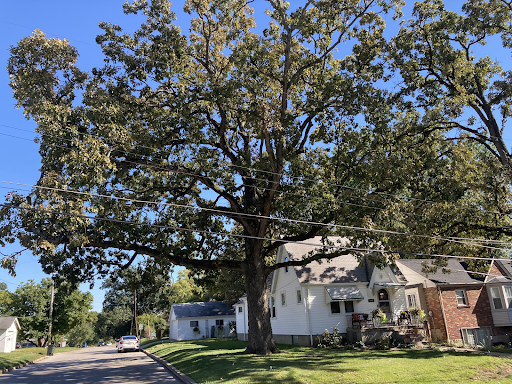 Quercus stellata, post oak, does not enjoy the prestige of its close relatives White Oak and Bur Oak. Its growth rate is glacial, even by the slow standards of its family. It tends to grow naturally in places with rocky, barren soil, and in days past it was thought to cause infertility – the leaves and acorns are still said to “poison the soil” by some old-timers. We now understand that this is guilt by association and that Post Oak just happens to thrive in poor sites, but the bad reputation seems to linger. It’s growth habit is contorted, twisted, and knotty. To some people it is ugly, to others it is possessed of great character and rugged beauty. On Missouri’s harsh knob tops it is often little more than a shrub (alongside its counterpart in the Red Oak family, Blackjack Oak), a self-made Bonsai growing only as large as the poor soil will allow

Never a large tree (70 feet is large, 50 more common), it nonetheless often looks large because its limbs tend to be huge (often as thick as the main stem) and spread as wide as, or wider than, its height. This habit can lead to substantial matts of moss growing on the limbs, and the two characteristics combined give it a resemblance to the illustrious Southern Live Oak. Large, stately Post Oaks are quite common in the older “inner ring” suburbs of St. Louis such as Kirkwood, Webster, and Brentwood in hilly areas, both near homes and in parks. Many of these trees are likely to be 200 years or more old – a good rule of thumb is that a Post Oak may be around 4 times older than a Pin or Northern Red Oak of equivalent size. (I once cut down a dying, 10” post oak, a runt of a tree, and upon counting its growth rings found it to be 62 years old).

A mature Quercus stellata is a glorious, grizzled veteran of a tree – twisted by the wind, warped by the rain, each tiny growth ring built of densely-packed wood made from scarce nutrients prized from barren earth. It has built itself slowly, patiently, every millimeter of growth cautiously measured and sculpted against the harsh forces of centuries. Such a tree does not die easily. The furious, once-in-a-decade wind storms that toppled so many trees last summer are but a brisk breeze to it. This is not a species destroyed by such occurrences; it is one that thrives and grows stronger because of them. Post Oak is playing a long game, and it seems to me we could all learn a few lessons from it.

Perhaps its greatest proponents are the people of Texas, a state in which (barring the far eastern portion) large trees are uncommon and gnarled, scrubby growth dominates. It is very common there, and gave rise to the Post Oak Savannah that once cut a wide swath through the center of the state. In much of Texas any tree over 20 feet tall could be called “big”, which certainly makes Post Oak a more distinguished tree there than in Missouri where the “big” bar is set nearer 80-100 feet. But the real reason for it’s beloved status in the Lone Star State is that it makes exquisite fuel. It burns hot at a slow, even rate, making it the preferred wood for Texas’s national dish, barbecue.

Pictured: This rather unassuming Quercus stellata in Brentwood is a certified ‘Liberty Tree’ – in 1976, the Missouri Department of Conservation verified that it was alive in 1776, thus making it at least 245 years old as of this date. Look at the streets (I’m standing on one taking this picture, it’s surrounded on two sides), the house and turf grass that have since arrived, and consider the massive levels of root disturbance this tree has sustained. It’s displaying only moderate tip dieback, less than is typical of such a mature tree.Truly a survivor.