Tree of the Week: Pond cypress

Tree of the Week: Winterberry holly

Tree of the Week: Arborvitae

Bald cypress is a magnificent tree, both aesthetically and ecologically, but it has a couple faults that cause people some hesitation in planting it: It gets BIG, over 100 feet in height, and it forms those pesky “knees”, the woody protuberances of its root system that look so interesting until you fall on one, or hit it with your lawnmower. In landscapes that trend towards smaller or more formal, this swamp giant comes lumbering in like a crude backwoodsman, cursing, spitting, and putting its dirty boots up on the coffee table, so to speak. The traditional solution is to plant the more refined (lacking in woody knees) dawn redwood instead. This is fine until you realize that it gets even larger than bald cypress (to 165 feet!), and does so faster. A more elegant solution, and one that allows us to still use a native tree, is to plant pond cypress, Taxodium ascendens, which can be thought of as bald cypress’s little cousin.

Topping out at around 50-60 feet in height, and usually only 15 feet in width, pond cypress is a much smaller tree. It will produce knees, but they too are of a much more subdued character than that of bald cypress – not only less likely to form at all, but when they do they are shorter and rounded. Bald cypress knees closely resemble stalagmites, and the mind shutters to think of what a serious fall onto one could potentially do. Pond cypress knees are more like upright, blunted rocks – I don’t think tumbling onto one would be pleasant, but given a choice I would gladly take it over the bald cypress knee. Both trees will grow in everything from standing water to bone-dry soil. Growth rates will be higher with more moisture, but dry-site cypress plantings can still be quite vigorous and are usually devoid of knees (this is even more likely for pond cypress).

The scientific names of trees are divided into the genus (in this case Taxodium) and specific epithet (here it is ascendens), the latter often being a descriptor of one of the plant’s features or where it likes to grow (palustris = of the swamp, montana = in mountainous regions, etc.). Ascendens refers to the growth habit of pond cypress needles, which tend to ascend upwards. I submit this as evidence that Latin names are quite useful and not just a cruel joke, and as yet another reason to plant pond cypress instead of dawn redwood, Metasequoia glyptostroboides.

Like bald cypress needles, those of pond cypress are soft, fragrant, and deciduous, often turning an attractive copper color in fall before dropping to form a lovely “red carpet” under the trees. Pond cypress is also long-lived, highly resistant to insect, fungal and bacterial attacks, and fast growing (just a little slower than bald cypress). Unfortunately it is uncommon in the nursery trade, although the ‘Debonair’ cultivar (introduced by the late, great Earl Cully who made the River Birch a celebrity with his ‘Heritage’ cultivar) has been making inroads into mainstream plantings. Straight species plants can also be obtained with a little work, and make an excellent addition to nearly any type of planting – rain gardens, street trees, formal landscapes, single specimens, whatever be thy fancy. Like bald cypress though, they do look best in groves. 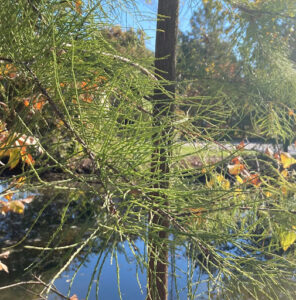 Pond cypress, planted in standing water by the author, in 2016. Note the ascending needles.
They’re nice and soft to the touch. It has never been watered.