Tree of the Week: Red Maple

Tree of the Week: Sweetgum 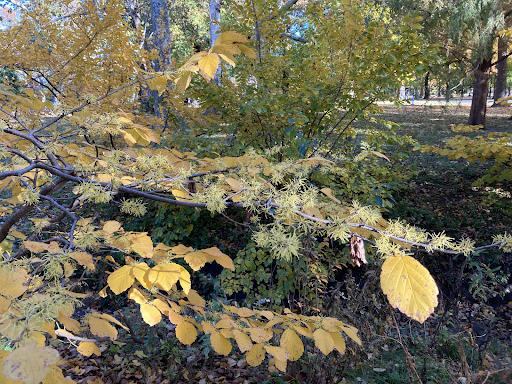 It’s not unusual to see spring flowering woody plants push out a few blooms in late summer or even further into fall – crabapples, cherries and magnolias do it fairly consistently, depending on the vagaries of the weather – but there is only one woody plant that puts outs its full season’s bloom when the rest are closing up shop for the holiday season: common witch hazel (Hamamelis virginiana). As November’s cold winds blow the leaves from the trees, and the season’s glory fades into the grey of the coming winter, it offers one last burst of color into the chill air.

Ironically the plant called “common witch hazel” seems to be the least common witch hazel in our area. Chinese, Japanese, and Ozark witch hazel, all of which bloom more or less in February, are much better represented in our landscape. In fact many people seem unaware that there is a fall blooming species, which is somewhat understandable. Its flowers are often obscured by the still-present leaves, which in a good year will take on a beautiful golden color that is almost a perfect match for the flowers’ petals. Even when visible, witch hazel flowers are small and easy to miss, and people are often still focusing on getting their last few glimpses of fall color when they are blooming. Their smell – wonderful, like all witch hazels – is subtle and is often lost in the melange of sweet, slightly decaying fragrances that waft from the freshly fallen leaves.

The habit of both of our native witch hazels to hide their flowers behind their leaves (vernal witch hazel tends to not drop its dead leaves until after flowering) has not endeared them to the ornamental horticulture industry, and so they are outnumbered in the planted landscape by the Chinese and Japanese species, or cultivars of the Ozark witch hazel that do drop their leaves early. But for common witch hazel, part of its magic is the possibility that its fall color and bloom time will coincide perfectly, and those little fiery blossoms will emerge among the golden leaves. If people are too unobservant (or perhaps just too cold and focused on getting back inside) to notice them, that is their loss. Anyone who has spent a lot of time in nature knows that it is miserly with the impatient, and lavishly rewards those with the curiosity to seek out its mysteries.

Common witch hazel is a larger plant than the others of its genus, growing up to 20 feet tall, but could easily be made to fit most landscape conditions with diligent pruning. While often called a tree it is what most people think of as a shrub, albeit a very large one, with multiple stems spreading outwards in every direction. (The largest known specimen in the state is located in Forest Park, on the southern end of the Victorian Bridge). It is a plant of streambanks and lowlands, and while it appreciates moisture it is highly tolerant of compaction, clay soil, and salt, and can grow in anything from full sun to full shade. Doug Tallamy lists it as supporting 62 species of caterpillar. (A few species of Eupsillia “winter moths”, fascinating little creatures that fly by night and raise their body temperatures by up to 50 degrees through shivering, are the odd cold-weather pollinators that assist H. virginiana in its chilly sexual escapades.) Considering its extreme adaptability – from Maine to Mexico, sun or shade – its outstanding wildlife benefits, and its mysteriously understated ornamental grandeur, common witch hazel deserves to be a lot less uncommon. 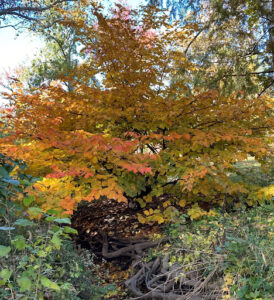 Happy in its streambank home, this common witch hazel is interplanted with Ozark witch hazel, for a cold weather double-whammy.
Double your pleasure, double your fun!