Tree of the Week: Lightening Strikes!

Tree of the Week: Sabamiki Catalpa

The very words send shivers down the spine of urban foresters everywhere. Four dread syllables, sounding the gunshot-crack of catastrophic tree failure. A two-word lightning bolt through the broken heart of a homeowner, realizing that their future is about to involve many unproductive, maddening hours on the phone with their insurance provider. What mere string of letters could have such a corrosive effect on the human spirit? Speak them with me, but quietly, with a faint and cautious whisper…”Included bark!” (Loud scary music plays.)

One of these trees has included bark, one does not. Can you guess which is which?

We all know what bark is, but how can it be included? And if it is included, well, isn’t inclusion a good thing? Not in this case. It’s important to realize that the outer layer of bark we see on a tree is in most cases dead tissue. This accumulation of dead cells is protective, against bugs, birds, extreme temperature and light fluctuations, fire, and people with pocket knives and a burning urge to inscribe their initials on something. The layer ranges from paper thin on species like American beech, to 2 feet thick at the base of a giant sequoia.

Having established that, let’s consider tree branches and their evil twin, codominant stems. Branches are, quite obviously, connected to the main trunk by living tissue. The branch gets thicker and the trunk gets thicker simultaneously, and the connection grows stronger and a branch collar is formed at the branch’s base. A codominant stem, on the other hand, is NOT a branch – it is attached to the main trunk of the tree, but it lacks the same biological connection that an actual branch has. It may look like a branch (that’s just what it wants you to think! Mwah-hah-ha), but it gives itself away by an acute, V-shaped angle of attachment.

I swear, I’m just a good, law-abiding branch! I’m not attempting to usurp the apical dominance of the central leader!

If this is getting confusing, it’s about to clear up (I think). Look at the picture above and note the crack radiating downward from the bottom of the V angle. Those two stems forking away from each other are not attached along that crack; there’s a wall of dead bark between them, preventing them from forming a strong, living attachment. Those are codominant stems.

Note the ridge at the base of the branch – this is the branch collar, the strong attachment point.
Now imagine the slingshot you could make with this tree and a nice bungee cord!

Now look at the picture above. No crack is visible. A nice, wide U-shaped junction is formed, and to the right is a true branch, not a treacherous, false branch. The entire circumference of the branch is connected by strong living tissue to the trunk and it will stay that way as the two stems get thicker. The result is a nice, clean crotch. Why isn’t it always like this? Why do codominant stems happen?

The reason is that trees, generally speaking, evolved in forests, where they are forced to compete for their own little gaps in the canopy. This process of competitive growth is regulated by hormones in the tree. The terminal bud – the bud at the very top of the seedling – is hormonally signaled to grow upwards towards the light, and the lateral buds – those on the side that will produce branches – to grow outwards. (The terminal bud then has apical dominance, and produces the central leader. All hail the central leader!) When a tree is taken out of a forest and given abundant sunshine, this hormonal balance can become upset. Two separate buds can develop apical dominance. The result is codominance, two stems, bitter rivals, competing for the throne, a rift of dead bark between them. A very Shakespearean dilemma in the plant kingdom, with a tragic ending.

They both bolt skyward, at a tight V-angle. No branch collar to keep them separated, just a dirty crotch full of included bark. As the two vying stems get thicker, they push and wedge each other apart. How quickly this happens, and how likely the union is to fail is highly dependent on the species of tree. (The Bradford pear, for example, is famous for included bark failures.) Some never fail, just as some perfectly healthy branches do fail. We can never predict failure with complete certainty. One thing that all arborists agree on though, is that included bark is the number one predictable indicator of failure. 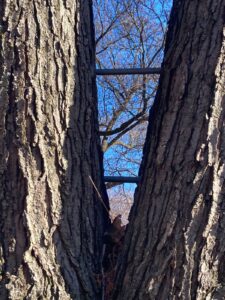 A bracing system at work in a mature red maple.

So what can we do? How can we exclude included bark from our crotches and prevent our trees from failing? If codominant stems are detected early on, one of them can be pruned out. This is usually best done in phases, pruning the less desirable stem away from the top down over a few years – the larger the tree, the longer the process should be drawn out. After a certain point, pruning is no longer feasible. In such cases, cabling and/or bracing systems can be installed. This should absolutely be done by an ISA Certified Arborist – there are established guidelines to ensure that the system is effective. I once saw a DIY job with an old chain-style bike lock, and a salivating lawyer staring at it with cartoon dollar signs in his eyes. Don’t be that person; call a professional. 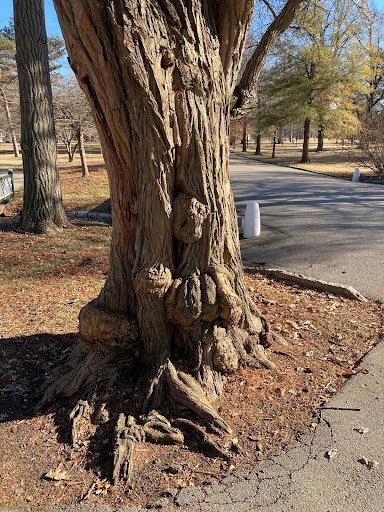