Tree of the Week Turns Over a New Leaf 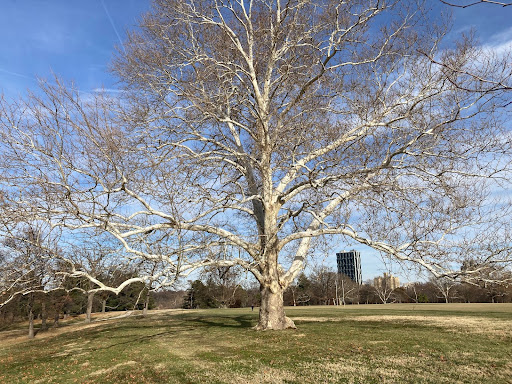 This American sycamore (Platanus occidentalis), located just off of Central Fields in Forest Park, has been one of my favorite trees since I first came across it. I was looking for a shady place to eat lunch on a hot summer day, and this tree had enough shade to keep a small army cool. While it’s not huge for a sycamore (maybe 80 feet tall), it’s an imposing tree because of its spread, and its giant lower limbs and trunk. Being situated on a hilltop, it is not at all where you would find a sycamore in nature; this species loves the bottomlands, moist hollows and streambanks. In such places they grow massively tall and wide, often devoid of lower branches for 50 feet as they concentrate their growth on reaching out of the shady lowlands into the sky.

And so it is a mixture of ample sun, no real competition from other trees, and being on a windswept hill that has made this tree so unique. Forest grown trees tend to form straight, single trunks with small, sparse branches, but given as much sunlight as they can stomach, the same tree will take on an entirely different form, spreading its limbs as wide as they will go, forming multiple trunks and staying short. While this creates “character” in spades, it often leads to what arborists are taught to see as structural defects.

In the picture above, you can see a conspicuously large branch at the bottom right side of the tree. This is what is commonly called an “overextended branch” – a structural defect. When has a branch overextended itself? It’s hard to say. Like trying to decide when you’ve had enough pie after a holiday meal, you usually don’t know until you’ve already gone too far . Likewise, a branch can only be said to be truly overextended with certainty when it breaks. We arborists tend to view branches like the one in the picture with suspicion, and yet after a huge storm, they’re often intact, while smaller, weaker branches have failed.

This close up shows a compartmentalizing wound, the remnants of a formerly overextended branch (judging by its size). It’s a good piece of evidence showing what usually happens to these branches; they get cut off. Why? There are three likely scenarios: (1) it actually did break, but far enough from the trunk that a nice, clean pruning cut was used to remove the remaining stub, (2) it grew so long it began to touch the ground, which creates an assortment of headaches for parks staff, so it was removed, or (3) someone saw how large it was, became concerned that either (1) or (2) would happen, and cut it off preemptively. Sadly, (3) is probably the most likely answer. (That it was cut off, and not a natural break, is certain from the clean, uniform growth sealing over the wound. It was, at least, a good pruning cut. In a few years the hole in the middle will likely be shut, the wound but a bad memory sealed off inside.)

A tree growing in the open like this, particularly on a hill, is in many cases better off forming a low, squat canopy of “overextended” branches because of wind; structural defects become strengths. A forest grown tree transplanted to this setting would topple easily. By absorbing most of the wind force closer to the ground, this sycamore is protecting itself. We can’t impose a “one size fits all” perfect form on trees, even of the same species. Consider ourselves, Homo sapiens; we are all one species. And yet on the savannas of Africa we have evolved to be tall and lanky, to maximize our body’s surface area to stay cool in the hot tropical sun. In the high Andes and Himalayas, we take on a squat form with short limbs, to minimize surface area, retain heat, and more easily circulate blood in low-oxygen environments. Both forms are perfectly suited to their environment. It’s almost as if nature knows what it’s doing…

Regardless of how beneficial or harmful these “abnormalities” of growth may be, it’s hard to argue that they don’t look cool. The oddest trees are always the most interesting to look at – Bonsai artists contort and scar their works of art for a reason. 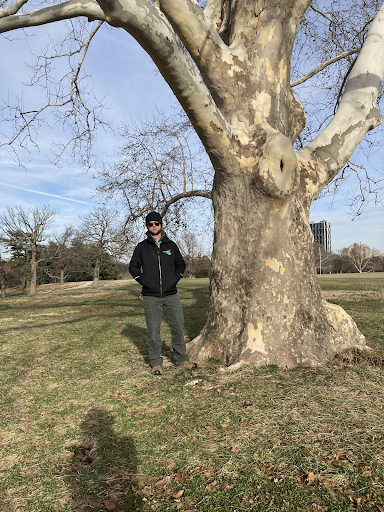 For perspective. Photo was taken by a random park visitor who stopped to talk about how much she loves this tree, too.